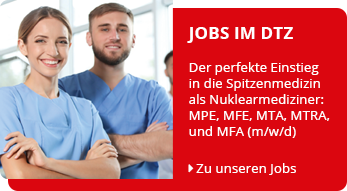 Malignant change and new formation of body tissue are generally referred to as cancer. More broadly speaking, the term is also used to mean uncontrolled, harmful cell growth. Generally it is not possible to determine the exact causes for such a clinical pathology.

However, we can assume that the natural balance between cell growth and cell division or death has been disturbed. This disturbance can be triggered by such things as poisons, radiation, mechanical influences, or even

Early identification of symptoms is crucial, because this is the only way the can disease be checked and the tumours prevented from spreading. Using its ultra-modern hybrid imaging technology (PET/CT, SPECT/CT, PET/MRT, SPECT/MRT), the DTZ in Berlin-Friedrichshain can identify even the smallest cell changes at a very early stage.

Based on these data, an agreed treatment plan can be drawn up for the subsequent therapy. We can treat a large number of cases in-house as outpatients, using our modern radiotherapy equipment.

How to find us

In accordance with Article 13 GDPR, we hereby inform you that a new privacy policy applies to this site. You can reach this policy from any subpage via the corresponding link. In addition, this website uses cookies for technical reasons. The data collected for the use of the website are exclusively evaluated internally in order to make the website more attractive to you. If you prefer not to receive cookies while browsing our website, your web browser can be set to warning or denying the storage automatically.